So Donald Trump has won the American presidency. The predominant fear expressed by Muslims in the US and even the world over is that Islamophobia will now receive a shot in the arm. This thought is not really far-fetched, given the strong anti-Muslim statements made by the Republican candidate in his campaign speeches. Hate crime is reported to have increased in the week following the US Presidential Elections on November 8. One just hopes that the compulsions of high office in the White House will have a moderating impact and Trump the president will be more discreet than Trump the Republican candidate.

Yet this occasion should prompt American Muslims – and also those living in Europe – to take a closer look at what many of them see as the rising tide of Islamophobia, which Mr Trump’s election has reinforced.

Earlier the focus of such collective bigotry use to be the colour of the skin. The black Americans primarily and the First Nation were the butt of (and many still are) the White Anglo-Saxon Protestants’ (WASP) hatred and discrimination. This mindset was a legacy of the era of slavery in the south and the colonisation of the land when the native Indians were pushed into reservations.

They were denied many rights and became victims of injustices of the worst kind. Harper Lee’s To Kill a Mocking Bird and Martin Luther King Jr’s “I have a dream” speech in the civil rights movement are vivid reminders of what the black suffered and are still suffering. In those days it was called racism. In due course, over the decades new laws were introduced. ‘Racist’   became a dirty epithet. And nobody liked to be called racist whatever be his mindset. Yet hate crimes have continued and racial prejudice persists in many sections of American society.

Against this backdrop came 9/11. The new circumstances threw faith to the forefront and Islam came to occupy centreplace in the new scheme of things. It was regarded as the new threat. This phenomenon was termed Islamophobia. In the hype that surrounds the issue, we forget that the terror attacks that now occur – beginning with the World Trade Centre, for instance – are unequivocally proclaimed to be in the name of Islam by the perpetrators themselves.

It is a bunch of irrational Islamic extremists who are setting the tone by bringing in religion. They proudly proclaim that they are acting – even killing innocent people – in the name of Allah. Extremists from the other side have responded by showing hatred and fear – an ugly combination.

Muslims have protested that Islam does not preach violence and the jihadis are not Muslims. But a lot of damage has already been done. Mercifully rational non-Muslims are willing to listen to the sane and moderate voices among the Muslims. But are the ways of the middle-of-the-road Muslims convincing enough to isolate the extremists and militants in their faith who live in the midst of Muslim communities in the West? The terrorists unleash horrific violence when they have the opportunity. They are too visible to be ignored. Who hasn’t seen them haranguing people with their extremist views. They have used technology to set up jihadist websites. Electronic means of communication have helped them reach the youth and drown the voices of sanity emanating from the moderate peaceful majority. Inter-faith dialogues have proved to be an exercise in futility when it comes to convincing the people at large. 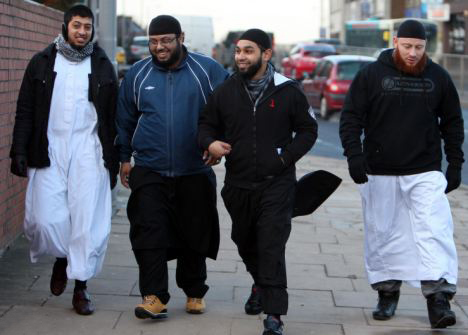 It is now clear that Muslims can counter the Islamophobia that confronts them by concentrating on a strategy of winning hearts. Winning minds is not enough, as inter-faith dialogues attempt to do.

The time has arrived for the Muslim immigrants to take a deeper look at their own lifestyle and the nature of their interactions with the majority of the WASP community in the US.

The fact is that not many of the Muslim migrants make an effort to socially assimilate with the mainstream American society. True they are willing to integrate economically, as otherwise they would not achieve their goal of migration – namely to make a more prosperous life for themselves and their families in the greener pastures they have chosen to move to. But there is a fine line between social integration and assimilation which we fail to recognise. The Muslim inability to understand this process leads to a measure of alienation. The problem emerges when sections of the host majority community become rigid in their response. Their unreasonable prejudices and biases are further reinforced by a holier-than -thou attitude flaunted by many immigrants. They take it to be their right to impose their ways on the host society, sometimes cutting corners to have their ways accepted. They bring up their children to look down on the norms and lifestyle of the majority that are dubbed as anti-Islam and immoral.

Not surprisingly, the second generation Muslim migrants born and brought up in the US tend to be more orthodox than their parents, who migrated several decades ago. While the fathers will be clean-shaven, the sons will sport beards. Modestly dressed mothers with heads uncovered have daughters who wear hijabs. The younger generation is often alienated and small wonder the parents of children who have run away to join ISIS or launched attacks in their host country have professed to not knowing that their offspring had been radicalised.

The only solution to this problem, as I see it, is adaptation. Immigrants should be prepared to adapt when they move to another country. It is important that they be mentally prepared for it when they decide to leave home for distant climes. Demands from some sections for integration have been met with resistance from the immigrant communities. They understandably do not want to lose their identity, religion, language and culture. Integration is a fuller process and not easy for most people. But there is another process termed assimilation.

It is easier if the will and willingness is present on both sides. A group that assimilates recognises itself as a part of the whole whose common interests it shares. But it is reassured that it does not have to give up its identity. The two sides also have to concede that they will have to take steps to accommodate one another’s individualities and socio-religio-cultural needs.

What would this entail in practical terms? The immigrants will have to fit into the existing system and not make extraordinary demands to suit their own needs. They are not required to surrender their identity or intrinsic culture/religion but they must find common grounds on which the two sides can meet on amicable terms.

For instance, they should show respect for each other’s faith and beliefs within the confines of law. How many Muslims greet their Chritian friends on Christmas? It is important that dietary habits and dress codes are observed without it being at the expense of social interaction.

And yet on numerous visits to Europe and North America, I have found that Pakistanis, with a few exception, have minimal interaction with the mainstream population in their lives outside the workplace. By far and large once the working hours have ended and people go home, the two communities create two worlds of their own. All friendly encounters take place within their own community, which is often facilitated by ethnic and religious communities living in residential neighbourhoods from where ‘the other’ are excluded. There is no effort to meet or build social relationships outside their workplace.

Those who step outside these self-imposed boundaries are better adjusted and have generally reported pleasant and positive experiences. They are those families – not too many – who make it a point to cultivate friendships with the mainstream community, invite their friends to their homes and allow their children to play with their children. If one of these youngsters inter-marries it doesn’t create a furore.

It was when I read an article by Dr Amjad Hussain, a surgeon who has lived and worked in the US for 50 years, that I realised how correct my observations were. He titles his article, ‘Apnay ghar mein ajnabi’ (Stranger in one’s own home). He writes about Pakistanis going abroad and making mini-Pakistans there. They create psychological ghettoes for themselves from which they do not emerge. Dr Hussain says that it is a matter of honour for them not to mingle with the local inhabitants or invite them to their festivals. They even challenge the rules of the educational institutions where their children study.

What has this got to do with Islamophobia? One may argue if the Muslims – the majority – are living peacefully but do not want to mix with the locals, what is the harm? The fact is that segregation gives rise to alienation and parochialism. Farid Zakaria, a popular Indian-American journalist and author, who hosts a popular TV programme on CNN called Global Public Square, made an apt observation in this context. Talking about Islamophobia he pointed out that those Americans who had interacted personally with Muslims understood them better and did not feel intimidated by them.

But many Americans are not personally familiar with a Muslim. Hence the misconceptions about Islam, considering the popular myths created by the jihadis.

In that case Dr Amjad Hussain has a point. Muslims should debunk these myths by promoting closer social ties between people of different faiths. Thus the two sides will learn from one another about their lifestyles, religious practices and cultural festivals.

The fact is that no impression is more authentic than the one derived from first-hand personal experience and the experience of friends and families. As for those who feel differently because their interpretation of Islam is too orthodox to allow any intermingling, shouldn’t they just stay home in their own country? Or, as someone remarked, perhaps migrate to Saudi Arabia?